Invented by American Inventor Nick Holonyak Jr in 1962, Light Emitted Diode (LED), as commonly believed, is a completely new energy saving lighting technology with series of advantages, for example, a much lower energy consumption and a much longer lifespan. 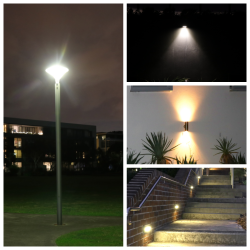 However, there are still shortcomings within LED products, and flickering is the most common one (Chen L and Zhan WX, 2014)[i]. Over the last few years, a large number of LED luminaires have been found to exhibit serious visual flickers.

Especially for retrofit MR16 or GLS lamps, which can have various types of flickers, due to the poor compatibility of commercial and domestic dimmers. Graph 1 and 2 below illustrates the speed camera test results of two LEDs.

It can be seen that the experiment downlight for Graph 1 had displayed a strong 100Hz flicker, which may be from an inadequate DC converter. In comparison, the luminaire for Graph 2 had exhibited no visible flicker. (Hammarb ck, 2013)[ii]

Typically, flickers of LED lights are in a high frequency flickering (>1000Hz). Although it is normally invisible for most people, it can still trigger a series of ocular illness. That is why I call LED flicking a devil that hides under the bright light.

There are four factors that can lead to the flickering of LED lights (Richardson, 2017)[iii]:

First, the injection of ripple current. It is caused by the broadcasting ripple signal on main cable, which is from energy supply utilities such as electric hot water system. This normally occurs in the late evening or in the afternoon, and it is more likely to happen when the lights are on dimmer.

Second, the incompatibility of LED dimmer and LED power supply. This is more common for upgrades from older lighting technologies to LEDs, as exiting wall dimmers are tend to be kept.

Third, improper wiring can cause LED light to flicker, as this will lead to overloading of power supply or LED dimmers

Forth and the last, for LED lighting curcuits that are on multiple dimmers, putting more than one dimmer on the same switchboard will lead to flickering of LED lights. This is because the small space between dimmers will decrease its ability of dissipating heat, which will result in an lower load from each dimmer, and it will make LED lights operate in an insufficient power to maintain stable performance.

According to the research from Nantong University, China (2011), under flickering lights, pupils in human eyes need to adjust frequently for the visualisation on the macula, this will likely cause eyestrain and myopia(Yu et.al., 2011) [iv].  Even worse, researchers from the State of Ohio University, USA claims that long term expose in low frequency flicker lights can cause severe vision-threatening diseases such as detachments, choroid atrophy, cataracts and glaucoma (Walline et. al., 2011) [v].Besides, if the flickering is in a frequency as high as several kHz, human eyes cannot be able to adjust fast enough to adapt the variation of irradiance. Thus, the excessive amount of light spectrum from the Led light will harm the retina, and causing photomechanical damage (Chen L and Zhan WX, 2014)[vi].

On the other hand, it is indicated by some other researches that the impact of flickering can be varied, as some people are naturally more sensitive to ripple of lights. Even for the same person, the flicker threshold and the critical flicker fusion can also varied in accordance of time of day, mood, stress level, hormone level, etc. (Wilkins,2010)[vii]. Nonetheless, against all the negative effects above, there is no doubt that LED flickering is harmful.

If flicking has already happening, it may be solved be the following measures (Richardson, 2017) :

-Change exiting dimmer to correct ones

-Re-install dimmer circuit and avoid putting more than one dimmer in one socket.

Frankly, there is no single solution that can completely stop LED flickering. Although IEEE PAR1789 had initiated a series of measures for safe flicker levels from LED lights. Unfortunately, these works are still in progress, and some time will be taken for it to formalize into specific standards, and additional time is also needed for these new technologies to be commercialised. Thus, to tame this devil, there is still a long way to go (Hammarb ck, 2013)[viiii].

Graph 3-1 and 3-2 had shown the result of flickering test for two different LED products. It is obvious that luminaire A has a lower flickering than luminaire B, as it is indicated by to the much lower value of flickering index and percentage.

Even though the current technologies are not yet able to resolve LED flickering, we can still easily get away from this issue by paying more attention when choosing an LED product.

In conclusion, when you are looking for an LED lighting solution, quality of power supply must be considered. Don’t fall into the trap of buying a cheaper driver thinking it will give you the same results, because it can be a costly mistake.

If you have any issues with a flickering LED, please call us at +61 2 9693 1871, or send an email to projects@everlite.com.au for assistance.